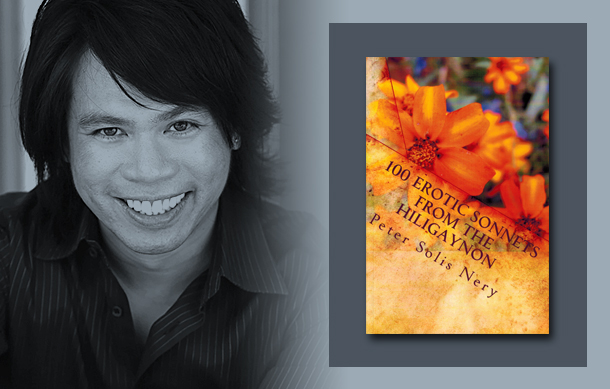 [from the Preface by Melecio F. Turao]

These poems were originally written in Hiligaynon and are best read in Hiligaynon. But I suppose the English translations can be taken on their own terms. When Nery set out to write these sonnets, he considered appealing to a wider audience. Nery has no trouble with his fellow Ilonggos (except perhaps the much expected gasps and tirades against his utter perversity) but if he has to call attention to sexual issues confronted by his milieu, he has to have a second, or third, or a dozen other opinions. Nery has heard enough of local opinions. This time, he wants to hear the world’s.

Peter Solis Nery is not under any illusion that graphic sex in whatever form commands sincere respect from critics and audiences. It is not his goal in this collection. But like it or not, sex sells. And sex is a thriving industry that has far bigger market than so-called serious literature. On the matter of poetics, Nery certainly takes issue with the relegating of taboo words to cheap thrills. To him, these words are neither pornographic nor immoral. They deserve as much space in everyday use as such words as dictator, politician, and prostitute. By using taboo words in a traditional poetic form like the sonnet, Nery is able to preserve them, and reclaim the Hiligaynon in the process.