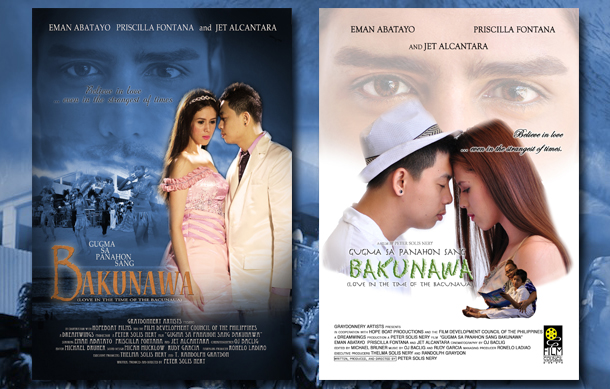 Gugma sa Panahon sang Bakunawa is the first full-length feature film written, produced, and directed by Ilonggo film auteur Peter Solis Nery. Shot on location in Dumangas, Iloilo and Buenavista, Guimaras, this landmark Hiligaynon film is about a struggling musician finding love in the frenzy of a festival created around the myth of the bakunawa sea monster. Filmed in six straight days in April 2012, the movie premiered in Davao City in June and July 2012, and was a finalist at the First Sineng Pambansa National Film Competition (2012) of the Film Development Council of the Philippines. Aside from going around the festival circuit in the Philippines including Cinema Rehiyon 5 of the National Commission for Culture and the Arts in Los Baños, Laguna; Bacollywood 2013: the 5th Visayan Film Festival in Bacolod City, Negros Occidental; Ilonggo Film Festival 2013 in Iloilo City; 6th Karay-a Arts Festival in San Jose, Antique; and CineKas1manwa: The Panay Islands Film Festival & Ilonggo Filmmakers’ Conference, among others, it was also the Philippine recommended entry to the 2012 Thessaloniki International Film Festival in Greece. Worldwide, the film has had special screenings in Singapore, California, and Maryland; and will soon be available as video on demand through Amazon.com.